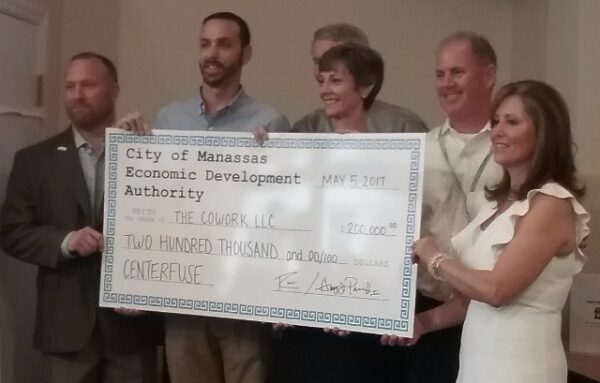 The note from the Manassas City Government signified the co-working space inside the old Hynson’s Department Store, more recently an old Fauquier Bank location at Center and Main streets in Downtown Manassas, is open for business.

The facility is designed for entrepreneurs or small businesses in need of office space in which to rent and work, a conference room, or a spot to sit down, open a laptop, and fire off some business emails.

“We looked at all kinds of different models.. what we ultimately settled on is a public-private partnership where this is a business-led enterprise,” said Manassas Economic Development Director Patrick Small.

Small told more than 100 people gathered for the ribbon cutting that business leaders are job creators, and government can create an environment can help create jobs.

The grant awarded to CENTERFUSE was used to fund the renovation of the interior of the building. A new work bar was added around the large windows for customers to sit and work on their laptops. And a new kitchen area with granite countertops will be used for gatherings, and a small stage was built for presentations.

CENTERFUSE must remain a viable operation for at least two years, or the city could enact a clawback clause in its agreement that would require the money to be paid back.

At its grand opening Friday night, CENTERFUSE had netted three “grab-a-spot” and one office customer. City leader hopes the facility will attract start-ups companies that will utilize business education services and programs provided by Historic Manassas, Inc, and then graduate into larger office spaces in the city.

“Whatever your charging you should charge more,” said Micheal Howard, president of TelNet Inc., which is now a partner in the venture.

Howard grew TelNet from his kitchen table in Manassas and said that he would have benefitted from a similar co-working space years ago.

“It’s hard to find people you can talk to for the questions you don’t have the answer to,” said Howard.

City leaders hope the facility will attract start-ups companies that will utilize business education services and programs provided by Historic Manassas, Inc, and then graduate into larger office spaces in the city.

The founding partner businesses in CENTERFUSE are Whitlock Wealth and ECU Communications. Both companies opened offices above the street-level co-working space.

The success of the co-working space, like similar co-working spaces in the region, will hing on the type of businesses it attracts. While other co-working centers in Fairfax County are populated with technology companies, one possible customer for CENTERFUSE could be lawyers from outside Prince William County working to prepare for a case at the nearby county courthouse.