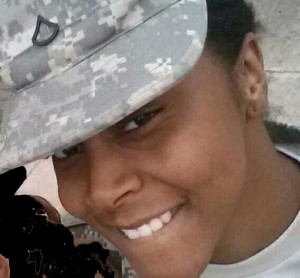 London Colvin, a 21-year old private in the Army Reserve is recovering from injuries she suffered when attacked by a Norfolk Police dog.

Colvin was at the scene of a fight 2:15 a.m. Sunday, at an off-campus party near Norfolk State University, in Norfolk, where Colvin is a second-semester junior and Sociology major.

Colvin graduated from Woodbridge Senior High School in 2011. She is currently a private with the 3rd Brigade, 318th Regiment and 78th Training Division, based at Fort Belvoir.

“She was at a party off campus. She said that a fight broke out, and she had nothing to do with the fight. She did say she was at the party, and her and her friends were leaving,” said Whitney Dunn, the victim’s cousin. “She was definitely being loud – she did admit to that.”

“Her and her friends continued to walk, and she said that she definitely continued to be loud, however they were walking away. The two other police officers approached her – asked her to stop. Whatever the case may be, they had her down on the ground when the dog came. Two of the police officers restrained her on the ground, and then they allowed the dogs to attack her,” Whitney Dunn said.

London Colvin did not speak with Potomac Local about what happened that night, but did tell us she is seeking legal counsel and has been advised not to make any statements about the incident.

According to the Norfolk police spokesman Daniel Hudson, having a police canine at the scene is standard protocol for incidents with large groups of people.

“We responded to a massive fight that happened in the street. Apparently there was a call for about 35 individuals who were partaking in a physical fight in the middle of the street. And once we have that multitude of people, we always have our canine officers respond out there with us for crowd management,” Hudson said.

Hudson went on to state that the reason the police canine was allowed to approach Colvin was to keep the crowd under control and protect other witnesses at the incident.

“There was an officer that was attempting to place the woman in custody for disorderly conduct. When [the officer] tried to place her in custody, she became combative against the officer. Another officer attempted to restrain her, but again, there were multiple people around, so the canine officer deployed the dog to restrain the woman so nobody would get hurt,” stated Hudson.

After the attack, Colvin was transported to a hospital, where she received 40 stitches to close several non-life threatening wounds on her leg.

“The one [wound] that is open on her leg can’t be closed. That’s going to need plastic surgery,” Whitney Dunn said.

Hudson confirmed that there are charges pending against Colvin by the Norfolk police, but could not verify the exact charges.

Whitney Dunn spoke for the Colvin family, stating they understood the need for restraint but were upset about the use of the dog and Colvin’s resulting injuries.

“How I felt about the situation was, and how I think my whole family feels about the situation is – we can understand her getting arrested, because she was being disorderly or anything like that – however she didn’t have a weapon. She can’t put her hands up, or remove her hands from anywhere, or do anything because she’s being restrained by two police officers. So to allow the dog [to attack] is the only thing that we have a problem with,” said Whitney Dunn.