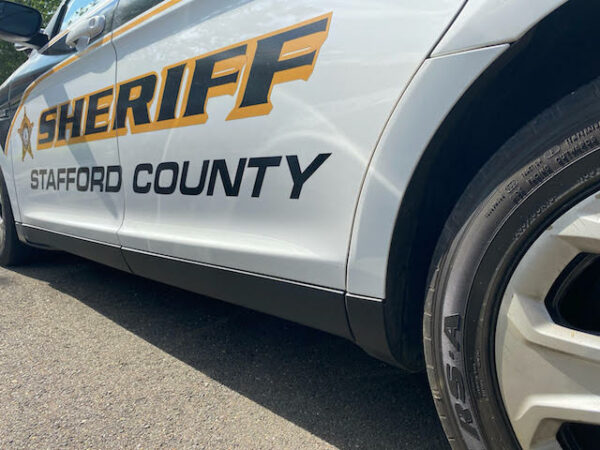 From Prince William police: On October 12 at 8:29PM, officers responded to the 1400 block of Cottonwood Ct. in Woodbridge (22191) to investigate a shots fired call. The investigation revealed that two groups of individuals were near the above area when gunfire was exchanged. Some of the individuals from one of the groups ran to a nearby residence and contacted the police, while other individuals fled in a light-colored vehicle prior to police arriving in the area. No injuries were reported. While canvassing officers located two unoccupied vehicles that sustained damage consistent with being struck by projectiles. This incident does not appear random. The investigation continues.

From Prince William police: On October 8 at 5:30PM, officers responded to the 2400 block of Prince William Pkwy in Woodbridge (22192) to investigate a robbery. The victim, a 33-year-old woman, reported to police she and an acquaintance, identified as the accused, were involved in a verbal altercation. During the encounter, the accused forced the victim out of her vehicle before driving off. While investigating, the vehicle was returned to the victim by another acquaintance. No injuries were reported. Following the investigation, officers obtained arrest warrants for the accused, identified as Shane Dareon POLLARD. Attempts to locate the accused have been unsuccessful.
Wanted: [Photo from May 2019]
Shane Dareon POLLARD, 29, of the 1400 block of Ranger Lp. in Woodbridge
Described as a black male, approximately 6’3”, 200lbs., with black hair, brown eyes, and multiple tattoos
Wanted for carjacking From the Stafford sheriff’s office: At 4:51 p.m. [Tuesday, Oct. 12, 2021] Stafford Sheriff’s Office deputies responded to the Anytime Fitness at 25 Tech Parkway for a disturbance. Multiple callers reported three black males had attacked a gym patron in an attempt to steal his car.

Once on scene, deputies learned the suspects had approached the victim wielding a wooden stick and struck him several times in an attempt to steal his car. The victim, trained in mixed martial arts, fought back against the attackers. One of the suspects was able to obtain the victim’s car key and attempted to steal the car. The suspect was stymied by the manual transmission and had no clue how to drive the car.

Additional gym patrons rushed out and assisted in thwarting the robbery attempt. All three suspects were able to get back to their vehicle and flee the scene.

Deputies learned the suspects were driving a white Acura sedan with Mississippi license plates. Within minutes Sgt. R.K. Pinkard located the suspect vehicle on Garrisonville Road near I-95 and attempted to conduct a traffic stop.

Instead of stopping, the suspects initiated a pursuit and headed northbound on I-95. Deputy T.A. Vasquez joined the pursuit as speeds reached 98 mph. Near the 145 mile marker, the suspects entered the HOV lanes by crashing through the barrier arm and began driving northbound while traffic was headed southbound. Miraculously, there was no accident and the suspects stopped on their own at the 147 mile marker.

The suspects fled on foot into the wooded median between the HOV lanes and the southbound lanes of the Interstate. The suspects obviously did not know K-9 Titan was on call and was headed to the scene with his handler Sgt. B.U. Demirci.

Stafford deputies were assisted by the Virginia State Police and Quantico PMO in establishing a perimeter. K-9 Titan quickly tracked through the heavy brush and located the suspects. All three were ordered to the ground and told not to run or the K-9 would be deployed. Two of the suspects complied and were handcuffed without incident. The third suspect incorrectly judged his own speed or K-9 Titan’s speed and attempted to run away. This attempt was futile as K-9 Titan was released and apprehended the suspect within 50 yards.

From Prince William police: On October 9 at 11:15PM, officers responded to investigate a shooting reported to have occurred in the 7000 block of Lakota Dr. in Woodbridge (22192) earlier that evening. The victim, a 25-year-old man, reported to police that he arranged to sell marijuana to an unknown person via a social media app. The investigation revealed the victim and a 19-year-old female acquaintance were in the area to conduct the transaction. During the encounter, the victim observed two unknown men approach the rear of the vehicle brandishing firearms. The victim and the acquaintance quickly drove out of the area as the suspects began firing rounds towards them. At some point the victim was struck by one of the rounds and was driven to an area hospital where police were contacted. The victim was treated for non-life threatening injuries. While canvassing the above area, officers located spent shell casings on the ground. No additional injuries or property damage were reported.

From Prince William police: On October 9 at 4:53PM, officers responded to the Wells Fargo located at 8441 Sudley Rd. in Manassas (20109) to investigate a robbery. The victim, a 27-year-old man, reported to police that he was approached by a masked man while inside the vestibule area using the ATM. During the encounter, the man brandished a firearm and demanded the victim’s money. The suspect took the victim’s money and threatened him before fleeing the area. No injuries were reported. A police K-9 searched the area for the suspect who was not located.
Suspect Description:
A Hispanic male, around 20 years of age, wearing a dark colored hooded sweatshirt, light-colored pants, and a yellow surgical-style mask

From Prince William police: On October 10 at 10:46PM, officers responded to investigate an assault that was reported to have occurred in the 5000 block of Softwood Ln. in Woodbridge (22192) sometime between 5:00PM and 6:00PM. The victim, a 19-year-old woman, reported to police that she was approached by an unknown man. During the encounter, the man inappropriately touched the victim before she was able to push him away. The suspect then pulled down his pants and exposed himself to the victim before she left the area. The victim eventually contacted the police. No injuries were reported.

Tech Parkway, 10/12, 3:50 p.m. The license plates on two vehicles were stolen while they were parked in the area. The thefts are believed to have occurred sometime between October 7 and October 12. Barley Naked Brewery is located in this shopping center.