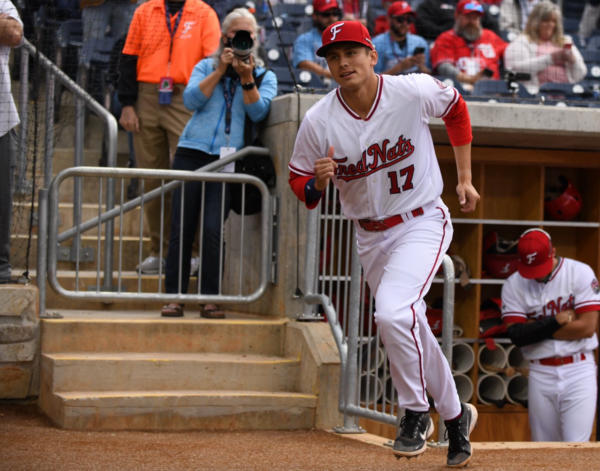 The Lynchburg Hillcats scored two runs in the top of the 9th inning to rally and beat the FredNats 6-4 in the series finale at Virginia Credit Union Stadium. Jacob Young had two hits and two RBIs, T.J. White had an RBI triple, and the FredNats still take five out of seven games in the series from the Hillcats.

Lynchburg scored the first two runs of the game in the 5th off FredNat starter Bryan Caceres after a home run and two doubles. Overall, Caceres had a good day, pitching five innings and allowing five hits, two earned runs and he struck out three.

Lynchburg’s Trenton Denholm had a perfect game going into the 5th inning, and then the FredNats broke through for five hits and three runs in the inning. Sammy Infante doubled with one out and was the first baserunner of the game for Fredericksburg, and then he was driven home by White’s first career professional triple off the right-field wall with 2 outs. Viandel Peña tied the game with a single, and then after another hit from Yonder Rivero, Jacob Young singled to drive in Peña to give the FredNats the lead at 3-2.
Back-to-back RBI doubles in the 7th gave the Hillcats the lead back at 4-3, and then Young came through again with two outs. He drove in Peña with an infield single to tie the game at four.

It would stay there until the 9th when Victor Planchart got the biggest hit of the series for the Hillcats, a double with the bases loaded and two outs to drive in two. The FredNats couldn’t rally in the bottom of the inning and fell 6-4.

Fredericksburg, Lynchburg, and Carolina are all 30-27 and tied for 1st place in the North Division of the Carolina League with nine games remaining in the first half. The first-half winner automatically makes the playoffs.

The FredNats will now travel to Myrtle Beach, S.C. for a six-game set with the Pelicans, who own the best record in the league at 40-17. The first pitch on Tuesday in Myrtle Beach is scheduled for 7:05 p.m.