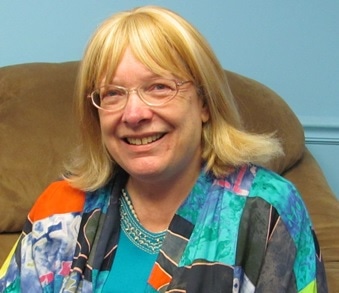 Ann Gurtler was born in Portland, Oregon in 1943. The family moved to Sacramento, California after the war, and that’s where Ann grew up. She went to UC Berkeley and got a degree in history; she was at Berkeley during the Free Speech Movement, which had an important effect on her life.  She worked at the Stanford Linear Accelerator and at Stanford Research International, both in Palo Alto, as a research assistant. In the late 60s she lived in Stockholm, Sweden, for a year, working for SRI, and then spent the next year traveling all over Europe. After she returned, she completed a Master’s Degree in Education, and her Master’s thesis was on the guru as teacher.

She returned to Silicon Valley to work, met her husband Bob Gurtler at a Zero Population Growth hike, and they moved to Virginia after their marriage. Their daughter Katherine was born in Manassas. Ann worked for IBM for several years.

Diagnosed with late onset schizophrenia, Ann struggled with her mental health issues for years.  When her symptoms became more manageable, Ann looked in the community for more support.  She could not find support, so she created it.

Ann sought out and received training from Johns Hopkins Hospital in how to begin and facilitate a peer support group for people with mental health challenges.  She immediately began a group in Manassas and led it for 20+ years.  Her commitment to her own mental health recovery and commitment to support others continued to grow.   In 2007, a grant initiative became available in Northern Virginia for businesses which were ran by and for people living with mental illness.  Ann recruited two of her friends and they started what is now known as Trillium Center, Inc.

Trillium Center is an award winning non-profit that offers Peer Support Services for people living with mental illness.  Ann helped create Trillium for the Prince William Community to continue to give the kind of support that she had been providing for years, but on a much larger scale.  Ann was most interested in providing support to people who were in a psychiatric crisis, offering social support, hosting a philosophical group once a week at Trillium, and playing cards with people.  In recent years Ann worked one night a week, committed to holding a Music Group for all who love music and a Support Group for women who attended Trillium.  She would also host the wildly popular Tea with Ms. Ann every few months.

Remembrances in lieu of flowers should be sent to Trillium Center, Inc., 13184 Centerpointe Way, Woodbridge, VA  22193 to support their Music Program.  A Zoom Celebration of Life will be held on February 21, 2021.  More details will be forthcoming and will be posted on www.TrilliumCenterInc.org as they are available.