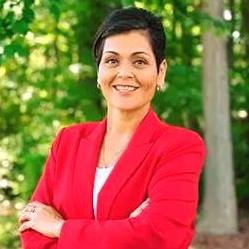 The Democrat won the 51st District that encompasses much of Prince William County by six points, beating Anderson who has served in the seat since 2009.

Ayala is a cybersecurity specialist by day and a community activist, as well as the President of the National Organization of Women Prince William County Chapter.

Anderson is a retired Air Force General who focused on veterans issues. He played an integral role in securing funding for a new veterans medical center to be located at Vint Hill and got legislation passed to curb texting and driving.

From a press release:

“I am so honored for the privilege to represent House District 51. I am humbled by the faith that my future constituents have placed in my candidacy and our message. I built my campaign on the promise of fair and equal representation of our community, in all of its wonderful diversity. I intend to make sure Richmond hears our local voices, especially as we fight to improve our schools, work toward long-term solutions to reduce traffic congestion and ensure affordable health care to those in need.

“In such endeavors, I look forward to expanding our coalition in making Prince William County an even better place to live, work and raise a family. As his constituent, I thank Delegate Anderson for his years of military and civilian service.

“After tonight, our work begins.”