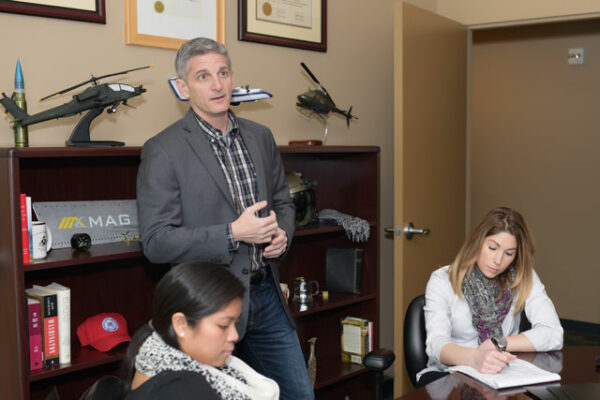 From a sinking ferry on a great lake in Africa, 14 lives were saved.

Flying an unmanned aerial vehicle above Lake Kivu in the Democratic Republic of Congo in summer 2015, a sensor operator sitting next to the pilot noticed a sinking ferry 40 nautical miles from shore.

“We joke around and say he used the “force” because he’s not a maritime guy, not former Navy or solider,” said Joe Fluet, CEO of Momentum Aerospace Group (MAG).

A total of 21 people were aboard the ferry that was capsizing in the lake. The drone operators had been on a reconnaissance mission seeking out intelligence on an insurgent group on the other side of the great lake. They deviated from the mission, took another pass near the sinking ferry and provided the geo-location position data of the doomed boat to the Congolese coast guard.

“In much of the world, when ferries sink everybody dies because there are no radios, no way to get rescue and no way to contact anybody. Those 14 people got to go home and be with their families that night,” said Fluet.

That was a memorable day for MAG; a six-year-old company Fluet founded shortly after retiring from the Army Reserve. Now with more than 600 employees on five continents, operating about 100 aircraft, the company headquarters sits in Woodbridge, Va.

MAG has become the hub for people who want to work in remote areas of the world, taking on difficult challenges, with the mindset of “country first.”

“We’re not a lifestyle company,” Fluet said. “The happy MAG employee has two things in life: work and family. Someone who wants to come in at nine and leave at five won’t do well at MAG because they won’t be happy.”

Checking and responding to emails late at night, and working on projects on weekends is just the beginning of the workload for the type of employees MAG attracts.

The reward for this work is high. “MAG pays above market for most positions”, said Fluet. “There’s also the satisfaction in a job well done, with a focus of a mission is to “make the world smaller and a safer place.” His company’s interests align with those of the U.S., and he expects the same kind of patriotism from his employees.

Before founding his company, Fluet was tasked in 2004 by the Pentagon to set up the very first Aviation Special Operations Unit in Afghanistan. After two tours in the Army and now with the Army Reserve and National Guard, Fluet was tapped for the project because of his experience in the cockpit. He spent one year in Afghanistan, where he called on the help of several contractors to get the job done. Unimpressed with the”mercenary” attitudes of many, the contractors he worked with were more about getting paid than providing a service to their country.

“I was unhappy with the contractors I hired at the time,” said Fluet. “I genuinely believed I could do it better than what I’d seen.”

When MAG began, Fluet found himself in Washington, D.C. almost on a daily basis, in meetings, providing support and winning contracts. Better communications technology today means he and his employees can work better remotely. His presence in D.C. has significantly diminished.

He chose to locate in Prince William County because of its business-friendly climate and proximity to the Pentagon, Fort Belvoir Army Base and Marine Corps Base Quantico. There’s also plenty of military service members in the area to make it feel like home.

“I went for a run one morning, stepped out onto my block, and I counted 11 American Flags outside of houses,” said Fluet. “Where else do you see that?”

More companies like his are locating to Prince William County because there’s Class A office space for 25% less than the cost of similar spaces in Northern Virginia. MAG will continue pursuing business from the military, U.N., and NATO, all while working in more remote and non-permissive areas across the globe.

It’s difficult to list what MAG does in a 15-second elevator speech. Fluet says that’s both a curse and a blessing.

“If you hired me to fly to you to Indianapolis because you needed to interview someone there, I’m happy to do that for you. But there are literally 5,000 companies that can do that. I would prefer to be hired to conduct aerial surveillance in Yemen. Not a lot of companies can do that.”

This promoted post is written by Potomac Local under an agreement with Prince William County Department of Economic Development to showcase business in the region.