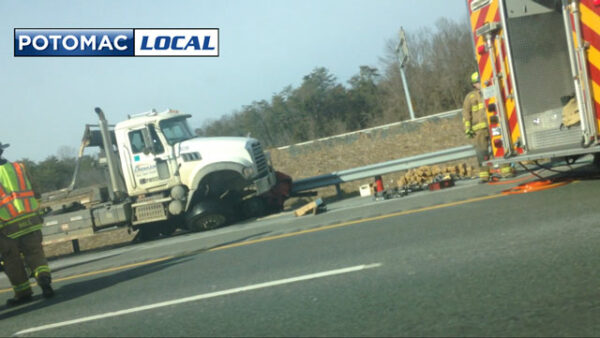 The driver and passenger traveling inside a Ford Focus on I-95 in Triangle Thursday morning died when the driver lost control of the car.

The two vehicles struck another car and then slammed into a jersey wall.

Virginia State Police are investigating a fatal crash involving a tractor-trailer and a passenger vehicle. At approximately 9:48 a.m., Virginia State Police Trooper C.A. Snyder responded to the crash Thursday, Feb. 6, 2014, in the northbound lanes of Interstate 95 at Exit 150 (Triangle) in Prince William County.

The driver and passenger of the Ford Focus died at the scene. Both were wearing a seatbelt.

Northbound lanes were closed and traffic was redirected to Route 1 at Exit for Route 619. All lanes of northbound traffic were re-opened at approximately 12:42 p.m.

The names of the victims was not released.

At 9:48 a.m., Virginia State Police were called to the scene of a two-vehicle crash in the northbound lanes of Interstate 95 at Exit 150 in Prince William County. There are two confirmed fatalities. The crash involves a tractor-trailer and a passenger vehicle. At this time, northbound lanes are closed and traffic is being redirected to Route 1 at Exit for Route 619. The crash happened at the 150 mile post at Triangle.

A large emergency response in now on the scene with multiple lanes blocked.

Here’s the latest from Prince William fire and rescue:

Units arrived to find a vehicle crushed between a rollback and against the guardrail. Fatalities have been confirmed and two left lanes shut down for investigation.