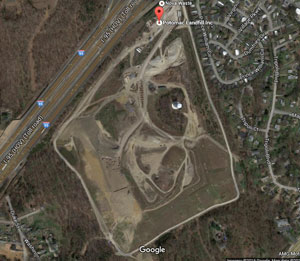 A debris landfill in Dumfries will close in 2032, and give the town government up to $4 million in host fees.

The Town Council and the landfill reached an agreement this month on the closure of the 101-acre facility. The agreement comes after years of on again, off again negotiations between the two entities.

Dumfries will be paid the host fee over the course of the next 16 years. In 2015, Potomac Landfill President Philip C. Peet told Potomac Local his landfill would be only of its kind in Virginia to pay such fees.

The agreement comes after years of wrangling between town residents, the Town Council, and landfill owners. After heavy rains in 2011, the smell of sulfur permeated throughout the town and adjacent Interstate 95 for weeks. The odors were treated and dissipated, but comments from town residents who argued that that the landfill trash heap was “too tall” never did.

The landfill will now be able to increase its height up to 250 feet. A 1987 court order mandated the landfill be no taller than 195 feet above sea level. Last spring, the landfill trash heap topped 220 feet.

The landfill must close on Feb. 2, 2032, regardless of how tall the trash heap is, said Dumfries Town Manager Dan Taber.

Potomac Landfill makes it money by mining materials dumped in the landfill and then selling them for scrap. The company will now pay 50 cents per net ton of debris brought to the landfill, and will eventually increase the fee to $2.50 per net ton once the Virginia Department of Environmental Quality new permits allowing the landfill to increase its height up to 250 feet.

The landfill will now also accept debris from Town of Dumfries Public Works crews at no charge, and will reimburse the town for all legal expenses incurred as part of the negotiations, said Taber.

A proposal in 2012 by the landfill to close in 15 years died after it proposed rising to 350 feet.