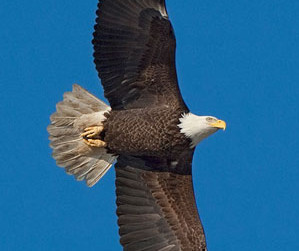 At the crack of dawn two days before Christmas, 40 volunteers fanned out across Nokesville and beyond to look for birds. While many were focused on last minute holiday shopping, Northern Virginia birders flocked together to count bird species and abundance as part of the annual Nokesville Christmas Bird Count.

This holiday tradition started in 1900 when concerns about declining bird populations were beginning to attract attention. Ornithologist Frank Chapman proposed counting and appreciating birds as an alternative to the annual Side Hunt, a competition to see who could shoot the most birds.

Now in its 113th year, the Christmas Bird Count is the largest and oldest citizen science event in the U.S. The National Audubon Society leads the effort, compiles data nationwide and makes the results available to all on their website. The data collected by volunteers is used by researchers, conservation biologists and others to study the long-term health and status of bird populations across North America.

In Northern Virginia, hundreds of people volunteer every year for one or more of five survey areas, which each cover a 15-mile diameter circle (113,000 acres).

The Nokesville Christmas Bird Count Circle, sponsored by Prince William Conservation Alliance, covers a diverse landscape at the edge of the Baltimore-Washington metropolitan area and captures the transition from coastal plain to piedmont ecosystems. It extends from the Prince William County landfill on Va. 234 to Nokesville, and from the Lunga Reservoir near Interstate 95 to Catlett in Fauquier County. The count circle includes portions of the Rural Crescent, Prince William Forest Park and large areas within Quantico Marine Corps Base.

Birders at this year’s Nokesville Christmas Bird Count saw clear skies and calm winds, with morning temperatures ranging from 20 degrees in the morning to a high of nearly 50 degrees. Together volunteers identified 90 different species of birds and nearly 13,000 individuals.

Highlights of the day included American Tree Sparrows and a surprise showing of Evening Grosbeaks at the Foggy Bottom Wetland. Fourteen Northern Shovelers were visiting a private pond in Nokesville and two Screech Owls were spotted near Bristow Road.

Traditionally the Prince William County Landfill has the largest numbers of Bald Eagles and this year was no different. Birders counted 10 adults and 10 immature Bald Eagles, along with many gulls including 650 Ring-billed Gulls and three Great Black-backed Gulls.

Species lists from previous Nokesville Circle counts are online here, where you can also find more information about this year’s survey.

The Christmas Bird Count is a holiday tradition that is lots of fun and helpful to scientists seeking to protect bird diversity nationwide. Volunteers for the Nokesville survey meet midday at Merrimac Farm Wildlife Management Area for a hot lunch and to trade news about the morning’s adventures before heading out to cover areas not surveyed in the morning.

Everyone is welcome, regardless of birding expertise. It’s a great way to learn more about local wildlife and meet new friends.