The suspect lives in an apartment at Covington Harper Elementary School near Dumfries, about six miles from Rippon Middle School, and had guns and ammunition inside the apartment, sources said.

Police said they searched the suspect’s at-school apartment and found guns and accessories on Tuesday, August 9. Police confiscated the weapons, which the suspect never brandished on school property.

Wilson, Jr. is on administrative leave pending the outcome of the investigation.

Most public schools in Prince William County School have someone living inside. Security residents are typically school teachers who work for the county school division, said spokeswoman Diana Gulotta.

The residents monitor the school grounds for alarms and respond to after-hours emergencies.

0 Comments
News
Students at public schools across our region today, including Stafford County and Manassas City, are headed back to class.

Manassas will welcome back 7,600 students at five elementary schools, two intermediate schools, one middle school, and one high school.

It’s the first time in two years that students will return to schools without facemask or social distancing requirements due to the coronavirus pandemic.

Meanwhile, in Stafford County, teachers are welcoming back students from all grade levels for the division’s first official day of school. Yesterday, kindergarten, sixth, and ninth-grade students were welcomed to their respective schools to learn the layout, meet up with friends, and attend a pep rally during the division’s first “transition day.”

It’s the first time Schools Superintendent Dr. Thomas Taylor welcomed the division’s more than 31,000 children to class on the first day of school since he took the job in December 2021. Taylor also enrolled his two children in the school division after moving to the area from Chesterfield County.

During a Stafford County School Board meeting on Tuesday, August 9, members remarked that it had been years since a sitting superintendent had children enrolled in the system.

Stafford High School rolled out the red carpet to welcome their students to the first day of school. @shsindiantribe #StaffordIndians pic.twitter.com/KDVTsiRmVk

School divisions across the region are facing shortages of teachers and bus drivers.

Called the “Courageous Four,” Fannie Fitzgerald, Mary Porter, Maxine Coleman, and Zella Brown took teaching positions in county public schools in 1964, about 10 years after the U.S. Supreme Court Brown vs. Board of Education decision that struck down segregation in schools.

Until then, the county schools had largely been segregated.

Attendees should park at the Ferlazzo Government Building, 15941 Donald Curtis Drive in Woodbridge. Shuttle buses will provide transportation to the unveiling ceremony.

Fitzgerald Elementary is named one of the Courageous Four. Another school in Woodbridge, Mary Porter Traditional School, is named after one of the original four teachers.

When I interviewed her, I had questions about the challenges she faced and how different the kids were back then. And she said, ‘kids are kids, they were no different,” Orrison told Potomac Local News.

Fitzgerald initially taught at the Macrae School, near Haymarket, originally established in 1870, and educated black children between 1914 and 1953. The school no longer stands.

Orrison said when compared to other jurisdictions forced to
integrate their schools, the process in Prince William County is considered one of the most successful classroom integrations.

The Prince William County Historical Commission approved the new marker a year ago.

There are two family connections to Fannie Fitzgerald Elementary School. While the school’s namesake died in 2016, Fitzgerald’s daughter, Kim Fitzgerald Lennon, teaches kindergarten at the school. She’s worked there since 2008.

Finally, the street on which Fannie Fitzgerald Elementary School sits is named after Fitzgerald’s daughter, Benita, who also has a historical marker erected in her honor.

Still living today, Benita Fitzgerald Mosley was an athlete on the U.S. Olympic Teams of 1980 and 1984. She graduated from Gar-Field Senior High School in Woodbridge in 1979.

“The contract extension unanimously approved by the School Board is an affirmation of the exceptional leadership of Dr. McDade. Following a tumultuous period in PWCS she has brought clarity, vision, and a steadfast focus on improving teaching and learning,” said Prince William County School Board Chairman At-Large Dr. Babur Lateef. “Public education is at an inflection point in history, the pandemic has left its mark on our students’ learning and wellbeing. Dr. McDade is the right person, at the right time, to ensure our students, teachers, employees, families, and community accelerate our work together to achieve the educational outcomes that every child deserves.”

During her first 100 days, Dr. McDade visited all 100 schools and conducted hundreds of listening sessions with teachers, students, families, business and community leaders, and employees. During her first seven months in office, she launched Vision 2025, Launching Thriving Futures.

This four-year Strategic Plan serves as a framework for ensuring every student in Prince William County graduates with the knowledge, skills, and habits of mind to create a thriving future for themselves and their community. In the spring of 2022, the School Board approved the largest budget in a generation funding the key priorities outlined in the Strategic Plan.

Dr. LaTanya D. McDade was appointed July 1, 2021, as the Superintendent for Prince William County Public Schools, which is the second-largest Division in Virginia and serves more than 90,000 students. She is the first woman and first African American to serve as Superintendent of the School Division. 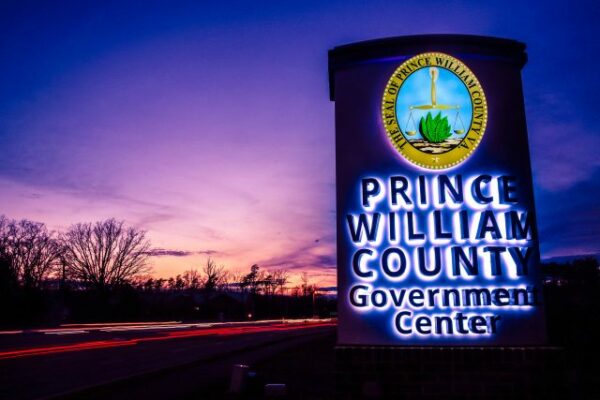 Prince William County will collect too much tax revenue in the coming year. As a result, it will give teachers and other county government school employees a bonus.

The Board of Supervisors agreed to front the county schools with $12.5 million for a one-time teacher bonus. Last April, in the largest county budget ever approved at $3.8 billion, Supervisors hiked taxes in anticipation of losing revenues from taxes collected at grocery stores. 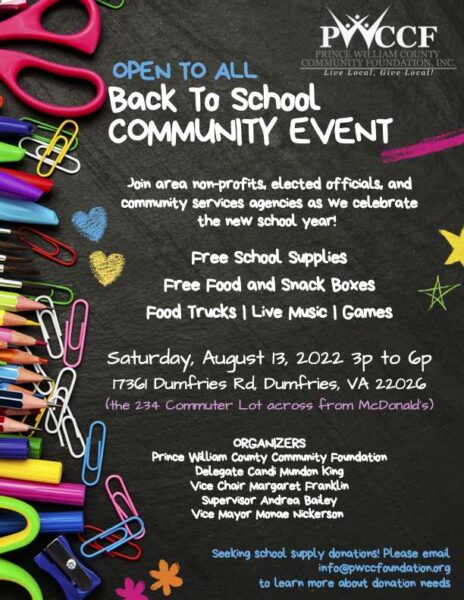 Parents and children are invited to come to the Route 234 Commuter Lot for a back-to-school event.

The commuter lot is across from a Mcdonald’s restaurant.

A biology class at the Governor's School in Innovation Park outside Manassas has been using molecular modeling software to teach its students about the chemical structures of medicines and other pharmaceuticals.

But even for these highly-intelligent students, some aspects of their studies can be challenging to grasp. One of those aspects, chemical structures, can be complicated even if it's being studied from a textbook.

Bock has 26 years of experience in instructional and leadership roles across numerous school systems. He began his career as a high school math teacher. He subsequently worked as an assistant principal, principal, and assistant superintendent. Most recently, as associate superintendent for Frederick County Public Schools, Bock led the division Health and Safety Committee during the COVID-19 pandemic that prioritized the health and safety of students, faculty, and staff while providing in-person instruction.

Bock holds master’s degrees in educational administration and educational technology, and a Bachelor of Science in mathematics from Shenandoah University in Winchester, Virginia.

0 Comments
News
Teachers in Prince William County will have a more significant say in salary negotiations after the School Board approved a collective bargaining resolution on June 15.

About 3,500 teachers, or about a quarter of the school division's workforce, submitted cards indicating they want lawyers to represent them during annual labor negotiations. The 7-1 vote by the School Board triggers what elected officials will be a lengthy process in determining what may be negotiated.