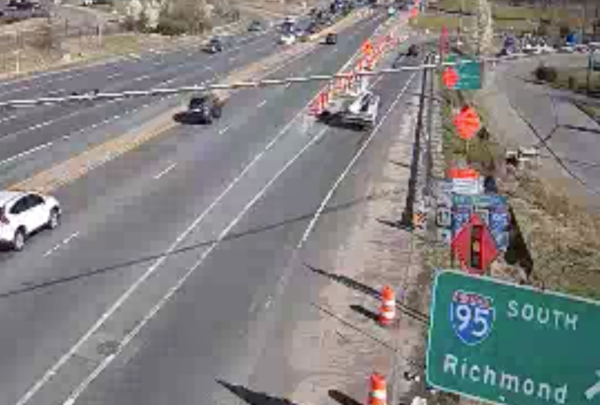 Drivers on Route 17 near Falmouth south should expect overnight delays near Fredericksburg in the coming weeks.

Construction crews will hoist new beams into place at the intersection of the highway and Route 17. The beams will support a new bridge that will carry traffic on I-95 south over Route 17.

The bridge is being installed as part of a $132 million project to improve not only the intersection of the two major roads but to also build a new I-95 bridge span over the Rappahannock River.

The work to lift the new beams into place will begin at 8 p.m. Tuesday, March 30. The entire project, to include the new bridge over the river, should wrap up sometime in 2022.

The Virginia Department of Transportation outlines the details in a press release.

Crews will start installing the new steel beams on the future Interstate 95 southbound bridge over Route 17 in Stafford County as part of the I-95 Southbound Rappahannock River Crossing project.

The beam installation will require intermittent full traffic stops on Route 17 over the next several weeks.

Starting at 8 p.m. tomorrow night, March 30, the right lane on Route 17 southbound between Sanford Drive and Short Street will close to get equipment into place ahead of the beam lifts.

All Route 17 southbound traffic will be stopped up to 30 minutes at a time between 11 p.m. and 3 a.m. each evening this week to lift and secure the bridge beams into place.

Weather permitting, lane closures on Route 17 southbound are scheduled at the following times:

Virginia State Police will assist with traffic control in the work zone.

Several megaprojects are under construction to reduce congestion and improve reliability on I-95 in the Fredericksburg area.

Construction on the I-95 Southbound Rappahannock River Crossing began in August 2018 and will be underway through May 2022.

The $132 million project is building three additional travel lanes between Exit 133 in Stafford and Exit 130 (Route 3) in Fredericksburg, and will build a new bridge span over the Rappahannock River.

New lanes are being built parallel to the existing southbound lanes in the median. With nearly 150,000 vehicles a day traveling on I-95 near the Rappahannock River, the new lanes will allow local traffic to travel along I-95 between interchanges separated from regional and interstate traffic traveling through the Fredericksburg area.

The I-95 Northbound Rappahannock River Crossing project will build additional northbound travel lanes between the same interchanges. Preliminary construction activities began in summer 2020, and new lanes will open to traffic in early 2024.

Both Rappahannock River Crossing projects will connect with 95 Express Lanes, which are being extended over 10 additional miles in Stafford to the Route 17 area.
The 95 Express Lanes Fredericksburg Extension is under construction and contractually will open to traffic in late 2022.

Two new Virginia education laws are going into effect July 1 – one will give parents the authority to opt children out of sexually explicit coursework and the other will reinstate some requirements for teachers to report student misdemeanors to police.