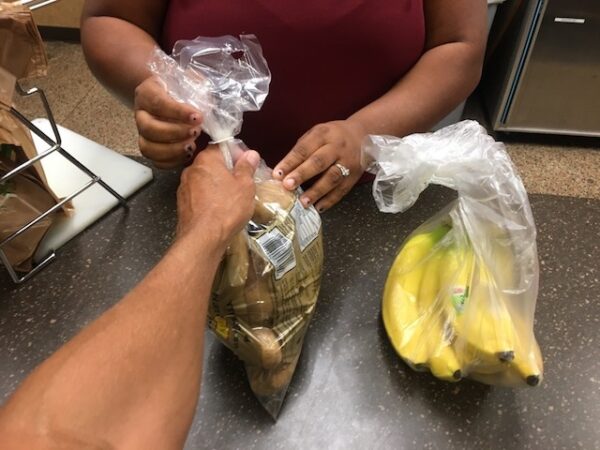 Prince William County Food Rescue is a new effort underway in the region to pair caterers, restaurants, and grocery stores with food pantries to deliver more fresh produce and dairy items to those who need them most.

The non-profit matches people with unused food to food pantries in Prince William County, Manassas, and Manassas Park. Donors are encouraged to go to the organization’s website to notify the organization there’s food available.

That start’s the food rescue process, said program director Aaron Tolson. Then, volunteer driver using the Prince William Food Rescue App is alerted to the food rescue and then are routed to pick up the food.

The average food rescue driver travels about five miles, for about 30 minutes at a time, said Tolson.

The organization’s top mission is to reduce hunger, which Tolson calls “food insecurity,” which afflicts one in seven area residents, he said. The percentage of free or reduced lunches distributed in the county school division is about five points higher than the state 40% average, he added.

In addition to restaurants, gas stations like WaWa and Sheetz, as well as farmers markets in the area have participated. So far, the organization has rescued 1,200 pounds of food from the landfill and has a goal of keeping two million pounds of food from entering the landfill by its third year in operation and reducing food insecurity in the region by 25%.

Two other people are working with Tolson on the Prince William Food Rescue Project. It’s Tolson’s brainchild, something he was launching a year ago before taking on his current full-time role working as a marketing director for ACTS.

Bristow residents gathered outside the Prince William County Government Center on Tuesday to implore leaders not to approve a rezoning that could lead to the construction of 14 new data centers near their homes and schools.

Employees at Stafford Hospital donned red in observance of “Go Red for Women,” which encourages awareness of women and heart disease.

Virginia Attorney General Jason Miyares was at Youth for Tomorrow in Bristow today to call attention to human trafficking.

The Riverside Center for the Performing Arts in Stafford County celebrated 25 years in business.